If the Immune System response keeps us healthy, what can we do to keep it healthy? 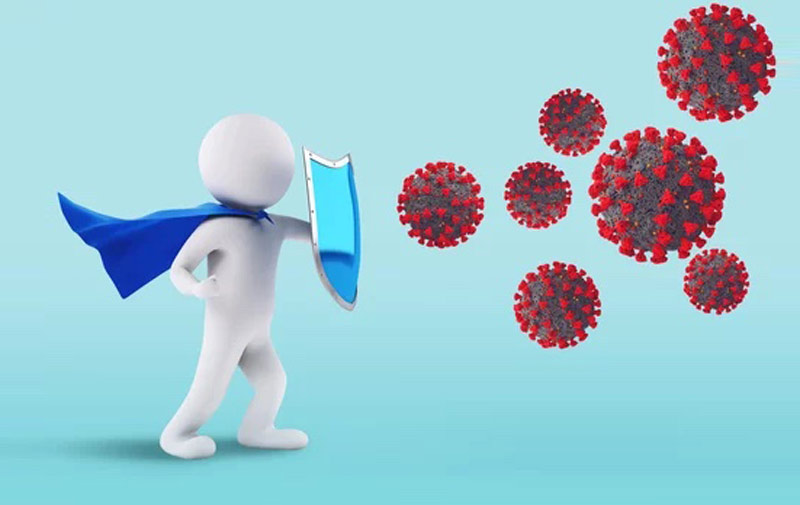 The immune system is comprised of cells contained in the blood, lymph nodes, thymus gland, spleen and liver. These cells cope with infection by virus, bacteria or foreign substances by clumping them with protein antibodies, dissolving them with enzymes, or chemically inactivating them. This is accomplished in most cases at the expense of the immune system cells, ie., they must be replaced.

Their replacement calls for optimal amounts of cell repair substances, such as vitamins B12 and Folate, and nucleic acids derived in part via ribose and Niacinamide. In addition, the antibodies produced by the immune system require optimal amounts of Vitamin A, zinc and amino acids. The white blood cells produce Hydroxy ion, a toxic free-radical capable of destroying bacteria, but also toxic to adjacent body cells. These cells are protected if the antioxidant system of the body is fully supported at the cell membranes by vitamin E; at the mitochondrial level within the cells by superoxide dismutase (which requires manganese and zinc); and in the intercellular fluids by vitamin C and free radical scavenging enzymes such as glutathione peroxidase, which depends on selenium and catalase which require iron for full activity.

In addition, modulation of the helper cells (inflammatory) and suppressor cells (anti-inflammatory) depends on the ratios of substrate essential fatty acids upon which prostaglandin hormone synthesis depends. The synthesis of prostaglandins also requires a full complement of B vitamins, particularly B6, and mineral activators such as magnesium and zinc. Niacin has the power, unique among the vitamins, to modify the immune system towards the anti-inflammatory. Because arachidonic acid from animal fat is a direct precursor of prostaglandin E2 and alpha linoleic acid from linseed oil is a precursor of prostaglandin E1, diets high in animal fat and cholesterol seem to predispose to inflammation, while those high in vegetable oils and fish oils are more anti-inflammatory and anti-allergy.

Since many of these immune functions are dependent on hard-to-get nutrients, it is not surprising that most of us at times experience weakened resistance to infection and toxicity, or over-sensitivity to foreign substances and allergens. In particular, the use of megadose vitamin A for a week after surgical procedures is known to prevent the usual drop in lymphocyte counts that otherwise appears. The use of vitamin C, B1 and cysteine is known to protect against acetaldehyde (a by-product of alcohol excess) and many other liver toxins.

The documentation of the importance of nutrient support of the immune system is already so vast that there is no doubt that this is one of the most important developments in Orthomolecular (Nutrition-Based) Therapy. The Methylation support in Ola Loa is the fundamental key that brings all these nutrients and co-factors together to maintain comprehensive immune function. Since megadoses are an important part of this, my dad would say, think of this “New Medicine” as Mega Nutrition.

Ola Loa SPORT Hydration Fuel is what I drink to get me through.