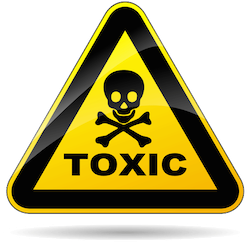 In 1968 as my dad began testing his patients hair for heavy metals such as lead, mercury, cadmium, fluoride, etc., it became clear that people were toxic. In the years since, lead was removed from gasoline, mercury was removed from paint and the Safe Water Drinking Act was passed all in hopes of minimizing our exposure to poisons.

Sadly, even with these laws and our awareness of the dangers of poison we still see widespread risk of toxicity. Most recent examples include the events in Flint, Michigan (http://www.cnn.com/2016/01/11/health/toxic-tap-water-flint-michigan/), where thousands of residents were exposed to horribly unsafe levels of lead in their drinking water, and in Porter Ranch, CA where the largest natural gas leak has leached thousands of kilograms per hour in benzine containing methane. (http://www.msnbc.com/msnbc/porter-ranch-gas-leak-catastrophe-not-seen-the-bp-oil-spill)

Unfortunately in an attempt to deliver clean water, a number of chemicals and known toxins are being added to most local municipal water supplies including fluoride and chloramine, a form of chlorine bound to ammonia, both of which cause lead and other metals to leach into drinking water. Of particular interest is the fact that Flint, Michigan, like many other municipalities fluoridates its water supply.

In 2007, Coplan, Patch, Masters and Bachman released research in Neurotoxicology, which showed that:

“Living in communities with silicofluoride treated water (SiFW) is associated with two neurotoxic effects: (1) Prevalence of children with elevated blood lead (PbB>10microg/dL) is about double that in non-fluoridated communities (Risk Ratio 2, chi2p<0.01). SiFW is associated with serious corrosion of lead-bearing brass plumbing, producing elevated water lead (PbW) at the faucet. New data refute the long-prevailing belief that PbW contributes little to children's blood lead (PbB), it is likely to contribute 50% or more. (2) SiFW has been shown to interfere with cholinergic function.”
(http://www.ncbi.nlm.nih.gov/pubmed/17420053)

Their research shows not only that the risks of contamination are still with us but the need for natural support for the body’s detoxification is needed more now than ever. Make no mistake—virtually all municipalities are suffering from tainted drinking water due to intentionally added contaminants, such as fluoride and chlorine or chloramine that increase lead and other minerals leached from the pipes in your own home.
(http://www.nytimes.com/2016/02/09/us/regulatory-gaps-leave-unsafe-lead-levels-in-water-nationwide.html?_r=0)

Nutrients are essential in detoxification but depleted in the process. That is why supplementation is so sensible. Vitamins E and C are best known; but vitamin A is also a direct antioxidant and free radical scavenger, able to prevent or minimize oxygen damage to cell membranes. Without such antioxidant protection, uncontrolled oxidation of membrane lipids can cause malfunction, cell death and transformation of normal cells into cancer cells

Beyond antioxidant vitamins, we are endowed with antioxidant enzymes, which provide greater efficiency and specificity, essential for health in our increasingly polluted world. The two best known of these enzymes are: Superoxide Dismutase (SOD) and Glutathione (GSH) and its partner Glutathione Peroxidase. SOD serves to convert the oxygen radical, superoxide, into hydrogen peroxide, a milder toxin. In a separate step, Glutathione Peroxidase detoxifies peroxide into water and elemental oxygen, safe and useful end-products.

Nutrients are required to support these vital functions. SOD requires copper and zinc to protect the watery part of cells (cytoplasm) and uses manganese as catalyst in the DNA-rich nucleus of the cell.

Glutathione, a methylation byproduct, is also instrumental as an electron donor to neutralize oxygen radicals; and in company with selenium it becomes a peroxidase, able to convert peroxide (H2O2) into water plus molecular oxygen! Glutathione is so precious that it is conserved by recycling via the glutathione reductase pathway, which requires niacin (B3), riboflavin (B2) and magnesium for its synthesis. Deficiency of glutathione is almost universal in sickness; but modern medicine has not yet made its diagnosis a priority. Glutathione is also used as a conjugate in transporting solubilized, but still toxic, remnants of unwanted molecules. These molecules are first processed in the liver by enzymes called cytochrome p450 that add hydroxyl (OH) to render toxins soluble. This enzyme process is powered by iron. But the p450 enzymes also require other nutrients, for they must be synthesized in your body; and this requires glycine,vitamin B6 and zinc.

Ultimately, the still toxic water soluble conjugates reach the kidneys and are excreted in the urine. Conjugation offers some protection for the kidney, which can be damaged by large amounts of toxins. Glutathione is especially protective but so valuable for over-all health and well-being that it deserves support in its own right, rather than uncontrolled excretion via the urine. Thus Nature has provided other molecules that can conjugate toxins and spare glutathione. Glycine, Taurine and Betaine (TMG) are featured in Ola Loa products. Betaine,glycine and taurine have double benefits: both are able to conjugate solubilized toxins. But they are also both osmolytes, offering cell protection against leaky membranes. They protect the kidneys.

This introduction to the role of nutrients in detoxification, shows that nutrients are essential for detoxification of unwanted molecules, ranging from oxygen free radicals to the myriads of pollutants that challenge everyone. Ola Loa provides comprehensive support for the natural detoxification pathways in the body and makes it easier to maintain the nutrient support you need. 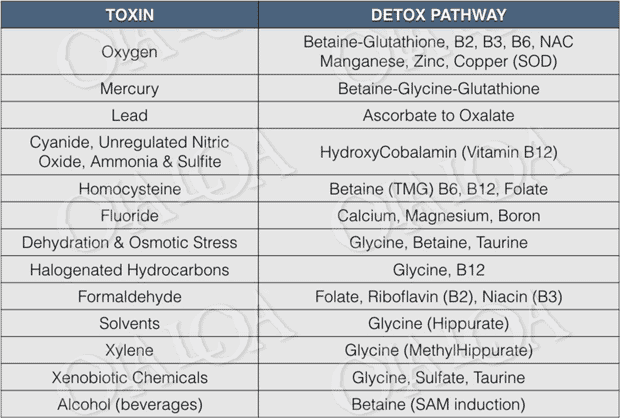 My name is Gloria, and I have MS. I've been using your products for almost 2 months now and all I can say is that no matter what time of day that I take your liquid vitamins, my energy increases without any side effects whatsoever! It really does my body good!